The Roadmap Process at SupportAbility

The SupportAbility product continuously evolves as we strive to make enhancements, to meet the needs of our subscribers; comply with the regulatory environment they operate in, and improve the experience of our users.

We release around 20 new versions of SupportAbility each year in our efforts to continually make the product better for our diverse subscriber base. Upgrades are applied after standard business hours to minimise the impact on service providers.

Whenever a new version of SupportAbility is released, we inform the nominated SupportAbility Authorised Representatives for each subscriber of all the changes we've made via our Release Notes. These Release Notes also link to new or updated documentation to assist providers in taking advantage of new features and enhancements.

SupportAbility's Engineering team follow the agile methodology, so we are releasing new versions of SupportAbility generally every 2-3 weeks. The great majority of upgrades happen live after hours and will not affect users even if they are using SupportAbility at the time. These minor upgrades and the changes within them are announced at the time of release. For major upgrades, like the recent upgrade to version 6.0, we communicated many times and months in advance, to help providers plan and prepare.

A complete list of all SupportAbility releases and all the improvements contained in each release can also be viewed on the  Release Notes page of our website. 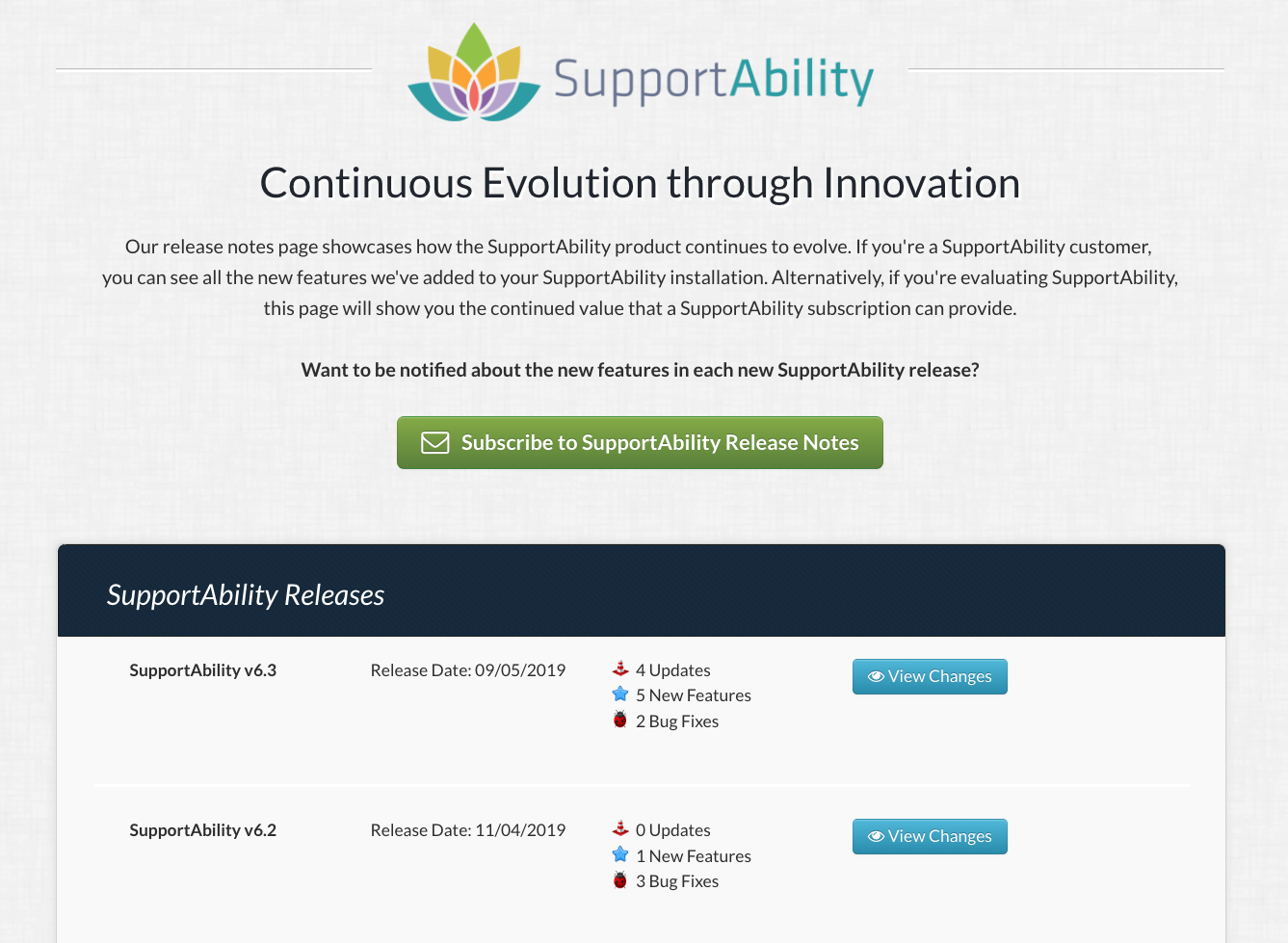 This release notes page can also be accessed by selecting the version number in the top right hand corner of SupportAbility e.g:

We track all of our subscriber feedback and product suggestions in our roadmap management system called AHA. Whenever we receive a request (as outlined above), the details of the enhancement are recorded and a vote is registered in AHA against the enhancement for each subscribing organisation that has requested the same thing.

SupportAbility is not customised for individual service providers but instead uses a community development model. The Australian Disability and Mental Health industry is an incredibly diverse ecosystem of service providers with many distinctly different services and ways of operating.  As a result, even though feature requests may seem imperative to an individual service provider, we are tasked with designing a system that meets the core needs of our large and growing subscriber base, whilst staying true to SupportAbility's core value of a providing a simple user experience.

We currently have over 500 enhancements suggestions from our subscriber base and that list is growing. Our intention has never been to develop every single enhancement that each subscriber requests, as this is not feasible and would inevitably create an unusable system that disadvantages our subscribers. Instead, we use this valuable feedback to identify key items that we receive regular requests for, so we can feed that information through to the SupportAbility Roadmap Committee who determine the product roadmap.

More information can be found regarding this in the Community Development Model article.

The Roadmap Committee meet regularly to re-evaluate the SupportAbility product roadmap based on:

These considerations listed above are constantly changing and as a result, our Roadmap Committee is tasked with adjusting the product roadmap to meet this challenge.

In the interests of greater transparency, access to our current  SupportAbility Roadmap has been published for our subscriber base. The roadmap contains a list of key changes we plan to make to the product over the next 12 months and at all times is subject to change where required.