A Service Provider that subscribes to SupportAbility may nominate up to two Authorised Representatives to be the spokespersons and represent the organisation in all matters.

This article outlines the responsibilities of these appointed representatives, as well as some information about who may best be suited in this role, SupportAbility updates and communications, what support is provided, and an overview of the Authorised Representative Nomination Form.

Authorised Representatives are the individuals authorised to liaise with SupportAbility on behalf of an organisation, and are also tasked with keeping up-to-date with all system updates and communications. This is to ensure your organisation is kept up-to-date regarding the updates and new features available given an updated version of SupportAbility is released approximately every three weeks.

The responsibilities of each appointed Authorised Representative are summarised formally as follows:

We recommend watching the Authorised Representatives video in addition to reading this article, for more information regarding this. This video may also be found in the 'Getting Started' section of the Core tab in the Learning Centre:

Who is best suited to being appointed as an Authorised Representative?

Who an organisation appoints as an Authorised Representative is an important strategic decision. Not only are these individuals the ones authorised to submit queries to us on behalf of an organisation, but they are responsible for keeping up-to-date with system updates and releases.

These individuals are the conduit for communication with various stakeholders across the organisation regarding important updates. Some features require strategic consideration by the executive management team for example in order to decide if & when they will be used, and if so, determining the best approach to rolling out these features to the required Staff Members when necessary.

The appointed individuals require the capacity to keep up with these changes and communicate them to the relevant stakeholders in a timely manner, as well as being the 'champions' of SupportAbility in order to support the business with the implementation and use of this important strategic tool.

Often providers appoint one representative across the operations side of the business, as well as someone from the finance team, however, this is completely up to your organisation.

An updated version of SupportAbility is released approximately every three weeks. These system upgrades occur after hours and sometimes require a planned outage in order to apply. Upgrades are comprised of new features, updates and bug fixes.

Release notes are sent on the night of the release and can also be viewed on the Release Notes page of our website, which is also accessible by selecting the version number on the top left-hand side of SupportAbility:

All SupportAbility updates, including release notes and announcements, are sent via email campaign: 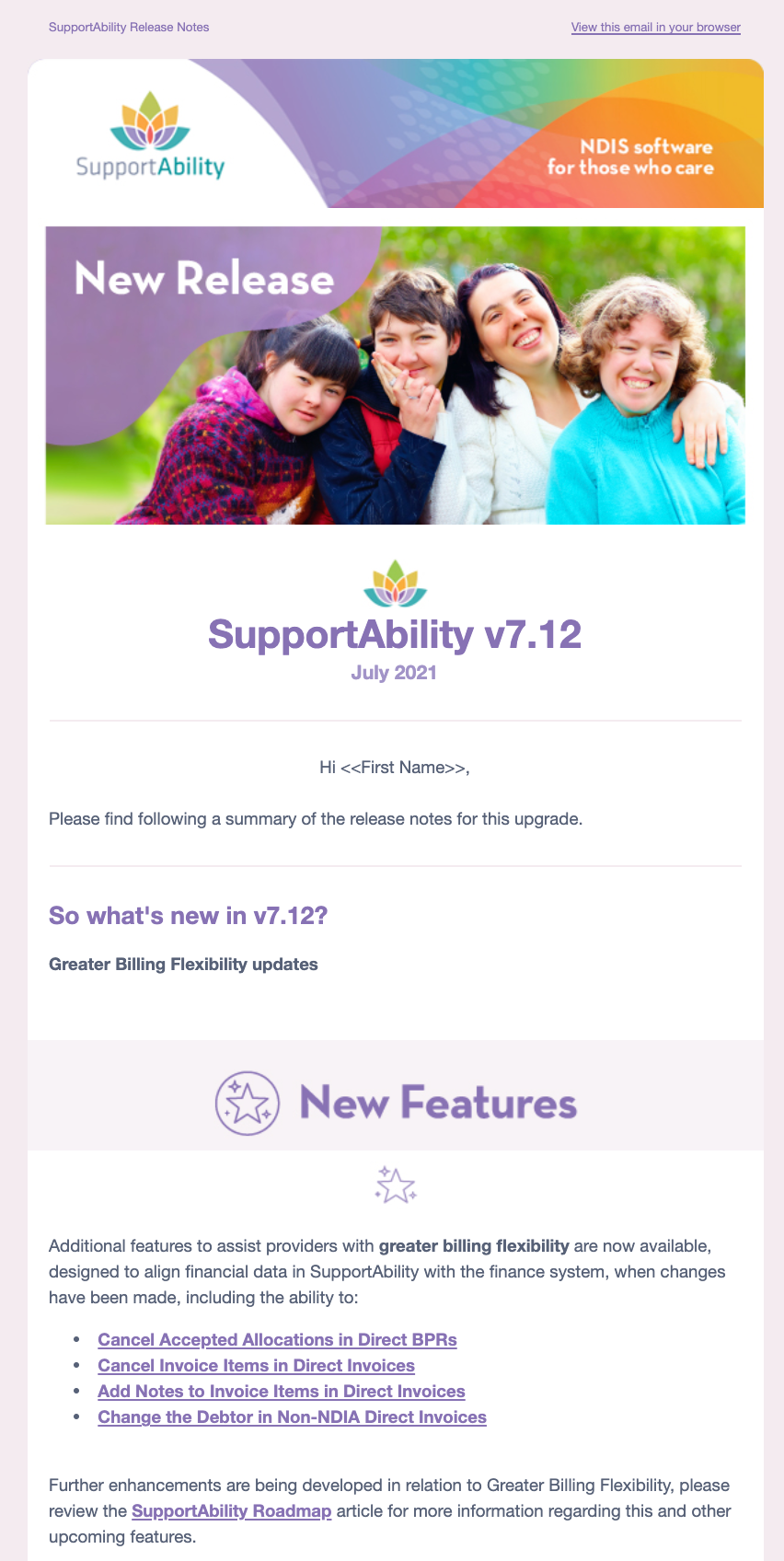 We also have some important articles that we recommend are reviewed regularly, that have been linked below for reference:

What support is provided?

Service Providers are responsible for providing first-tier support services for their users, making every effort to support Staff Members with training and troubleshoot answers to their queries & requests utilising the articles available in the SupportAbility Knowledge Base and the videos available in SupportAbility's inbuilt Learning Centre.

Unlimited second-tier email support is included as part of all SupportAbility subscriptions provided all support queries are managed internally first and channelled via these individuals when escalation is required. We are always happy to pick up the phone and call where needed, or to set up a Zoom session when better suited, however, we do require queries are submitted via email first to assist us best manage these.

All support queries are managed through our helpdesk ticketing system and we request that all questions/issues/queries are sent to us by an organisation's appointed Authorised Representatives via support@supportability.com.au. This creates a ticket for us to prioritise, investigate and respond to in our helpdesk system 'Help Scout'.

Incoming queries are triaged to the most appropriate person skilled to handle the query and we often collaborate where needed depending on the nature of the query. So whilst one person replies, on most occasions, the reply includes team input from the relevant parties in an effort to resolve the query successfully. All responses do originate from the 'SupportAbility Customer Success Team', however, the signature included at the bottom of the email will inform you as to who in the team has responded specifically.

This form is required, to ensure our records are accurate and to have this appointment formally signed by a CEO or Director within your organisation. This form has been designed as an editable pdf, so your responses can be populated directly from your computer. 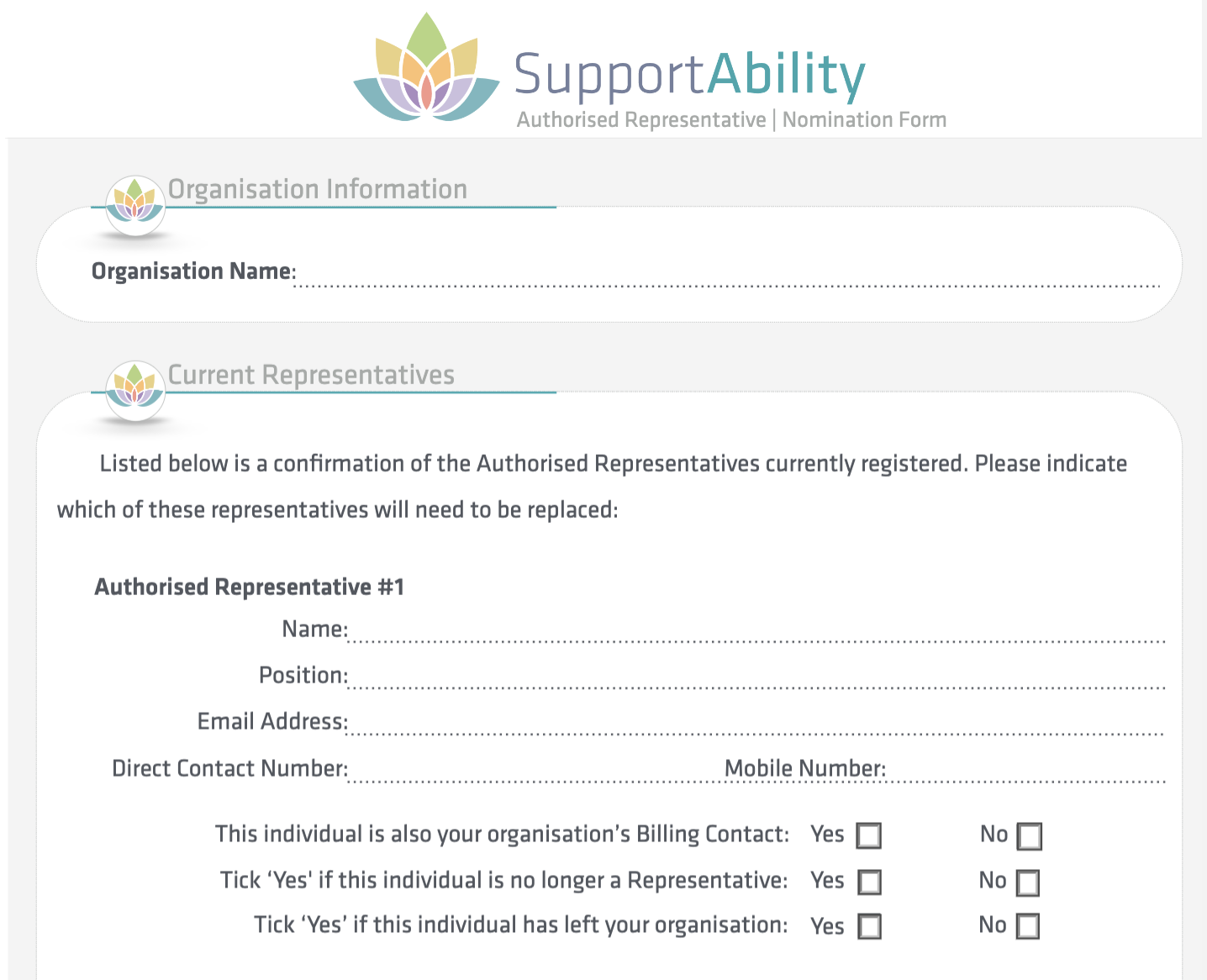 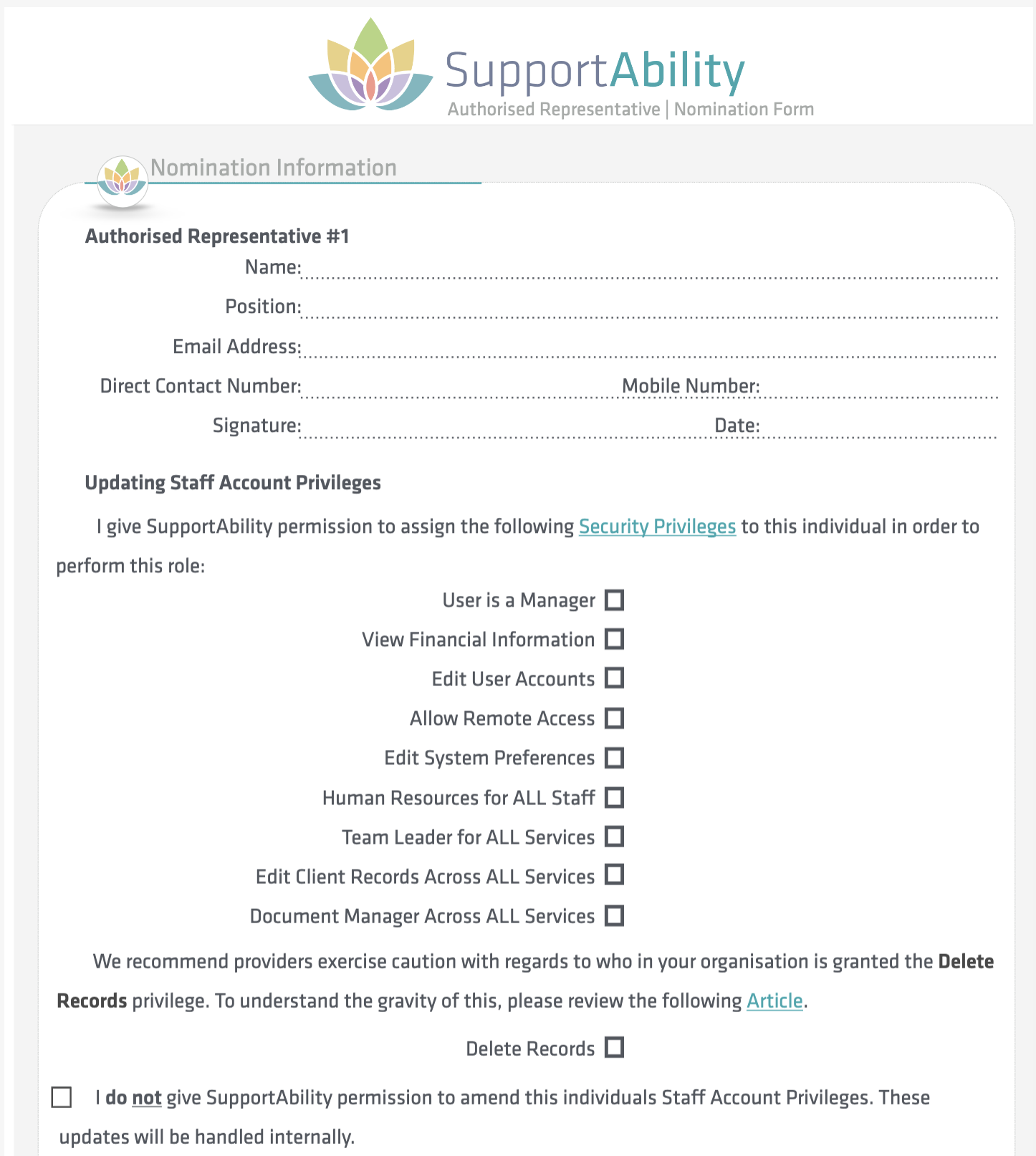