In the interest of providing greater transparency regarding planned enhancements and new features, details of the current SupportAbility Roadmap are updated here for the benefit of our subscriber base.

The roadmap lists the key changes we plan to make to SupportAbility over the next 12 months. It is not designed to be a complete or final list. Instead, it is focused on providing information regarding upcoming changes that will affect the way our subscribers use the product for the purpose of forward planning.

IMPORTANT NOTE: ALL ITEMS ON THE ROADMAP ARE SUBJECT TO CHANGE

In response to the February 2021 Roadmap Survey results, our major project for 2021 is well underway! This will introduce greater billing flexibility in SupportAbility for Agency Managed, Plan Managed and Self Managed NDIS Supports. This project will be delivered across several version releases to reduce the impact on providers whilst delivering these much-needed features as promptly as possible.

This first update as part of this project was released with the upgrade to SupportAbility v7.10 on the 22nd of June, 2021 and Staff are now navigated to a  new View/Edit Direct Invoice screen when the target icon is selected, instead of solely a PDF print preview of the Invoice data.

Individual Invoice Items can now be removed from Invoices using the Bulk Actions menu by Staff Members with the ‘View Financial Information’ Staff Account privilege in combination with either the ‘Edit Client Records Across ALL Services’ privilege or ‘Team Leader for ALL Services’ privilege.
Please see the  View/Edit Direct Invoice screen article linked below for more information about this.

Further related updates are expected in future releases including the ability to  mark an Invoice Item as Cancelled on the Invoice. The description will be updated to inform users that the Item was Cancelled.  Cancelled Invoice Items reverse the expenditure transaction within SupportAbility and are excluded when calculating Client NDIS Funding Budget Utilisation.

In cases where the Cancelled Support needs to be replaced with one or more alternative Support Allocations, refer to the new 'Add NDIS Support Allocations' feature under the 'Billing Flexibility after Activity Sign Off' section below.

Change the FPM for Self and/or Plan Managed NDIS Invoices

In addition to the above, functionality to allow providers to change the Financial Plan Manager (FPM) for Self and/or Plan Managed NDIS Invoices is also expected. This will allow the FPM to be changed to an alternative Plan Manager, or from a Plan Manager to the Client or their Billing Contact when they are Self Managing their funds, as required.

Sometimes Agency Managed Supports are successfully claimed as part of a Bulk Payment Request, and it is only after this fact, that providers become aware of mistakes with the claim and are tasked with correcting them.  This usually results in the provider having to reverse the transaction in the portal.  To ensure that SupportAbility is able to mirror this reversed transaction, we will be allowing providers to Cancel supports that were already Accepted and paid by the NDIA.  Support Allocations Cancelled in this manner will:

NOTE: In cases where the Cancelled support needs to be replaced with one or more alternative support Allocations, refer to the new 'Add NDIS Support Allocations' feature under the 'Billing Flexibility After Activity Sign-Off' section below.

Providers continually tell us of the challenges associated with delivering services to Clients, whilst they await new funding plan details from the NDIA, or Service Agreement being signed.  This can create situations, especially with Group Services, where billing for the Group needs to be withheld, by not performing the Activity Sign Off, for example, to ensure that the new NDIS Plan can be selected as the Funding Source for the Client once it becomes available.

Whilst the NDIS Plan Review feature was developed to assist with this, it is only helpful when an NDIS Funding record already exists. To address this issue, we are planning to create a new feature for Finance Staff to place a Client on 'Billing Hold' which would:

SupportAbility will be changing the way the Activity Sign Off is used to provide greater billing flexibility.  Moving forward, the Activity Sign Off will primarily be used to signal to the Finance Team that the Activity is ready to be picked up for billing when generating Direct Invoice Batches or BPRs.  Whilst it will lock the Activity from making any additional edits for most Staff Members, we will be providing Finance Staff with the ability to make additional changes after the Sign Off has been performed, including:

As part of our community development model, we recently reached out to all Authorised Representatives to learn what development direction is most important to each provider to help inform the SupportAbility Roadmap.

Four possible development directions were identified based on the most common requests from providers (outlined in detail in this article). Each of these represents a long-term project, therefore, the February 2021 Roadmap Survey was created in order to identify the single most important development direction for providers to assist determine what is prioritised next in the SupportAbility Roadmap.

We thank all providers who participated in this survey, your input and feedback is very much appreciated. We have registered all the additional feedback provided in our feedback register. However, we request that any issues reported as part of this additional feedback are submitted again through the appropriate channels with examples included via your organisation's Authorised Representatives to support@supportability.com.au to ensure they are attended to and investigated promptly for your organisation. Thank you kindly in advance.

The results of the recent February 2021 Roadmap Survey have been analysed and we are pleased to share these with you all: 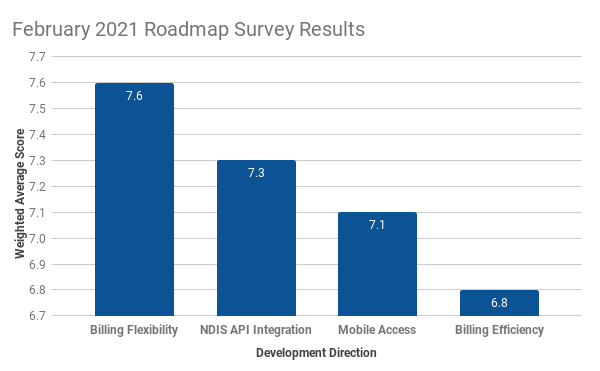 Greater Billing Flexibility has been determined as the most important development direction based on the feedback received. This development direction encompasses enhancements to make billing more flexible, to accommodate the diverse situations which arise when billing for NDIS Supports. These may include:

From here, a detailed discovery process will be undertaken, to learn which features associated with this development direction will deliver the most impact and establish exactly what development items will be scheduled in the upcoming SupportAbility Roadmap.

Thank you kindly in advance and we look forward to sharing more about what to expect in the coming months.